Ancient History of the Ewe people
The indigenous inhabitants of Kpando district form a homogeneous group of Ewe speaking people who origanally migrated from Notsie (located in the Republic of Togo) in the 17th century, fleeing from the tyrannical rule of Togbe Agorkorli (King Ago Akoli).

It seems to be generally accepted that the Ewe migrated from a place called Kotu or Amedzowe, somewhere east of the Niger around the 13th century. When they arrived in Notsie around 1500 their host King Adelã Atogble received them well and treated them nicely. His successor Ago Akoli however was very hostile and ordered to kill all elderly people, but the Ewe manged to keep one old man Tegli.
Along with the need for more land and food and inspired by the tyrannical rule of King  Ago Akoli, Tegli came with a plan to escape and the Ewe people travelled together to Tsévié (a town north of Lome in Togo). From there they divided into different groups, one of which is the Anlo Ewe. Under the leadership of Wenya and his nephew Sri they settled around the shores of Keta Lagoon by the early 1700's. Anlogã (meaning big Anlo) at the Atlantic Coast was the capital of the Anlo nation.

Colonial History
By 1471 the Portuguese had reached as first Europeans the area that was to become known as the Gold Coast because Europeans knew the area as the source of gold, ivory, and pepper. In 1482 the Portuguese built their first permanent trading post on the western coast of present-day Ghana. This fortress, Elmina Castle, still stands.
With the opening of European plantations in the New World during the 1500s, which suddenly expanded the demand for slaves in the Americas, trade in slaves soon overshadowed gold as the principal export of the area. The Portuguese position on the Gold Coast remained secure for almost a century.
During the seventeenth and eighteenth centuries other European competitors built fortified trading stations and challenged the Portuguese. The principal early struggle was between the Dutch and the Portuguese. With the loss of Elmina in 1642 to the Dutch, the Portuguese left the Gold Coast permanently.
The next 150 years various European powers struggled to establish or to maintain a position of dominance in the profitable trade of the Gold Coast littoral. The British gained possession of all Dutch coastal forts by the last quarter of the nineteenth century, thus making them the dominant European power on the Gold Coast.

During the Conference of Berlin in 1884/1885 (the Scramble of Africa), the Volta region became part of the Germand protectorate Togoland. The rest of todays Ghana became colonized by the United Kingdom. 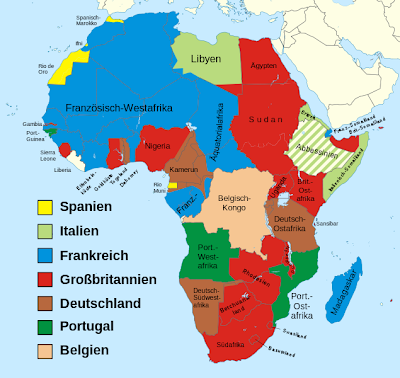 In 1916 during the First World War Togoland was split and the Volta region became a mandat of the United Kingdom. In 1922 British Togoland was formally placed under the British rule. Following the Second World War (1940-1945) British Togoland became a United Nations Trust Territory, although still administered by  the United Kingdom.
During the decolonization of Africa, a referendum was organised in British Togoland on 9 May 1956 to decide the future of the territory. The CPP (Convention People's Party) campaigned for integration with Gold Coast and the Togoland Congress wanted the continuation as a Trust Territory. 58% of votes opted for integration.
On 13 December 1956, this unification was put into effect, creating a single entity that became the new independent nation of Ghana on 6 March 1957.

Akpini
The people of the Kpando district are organised under chiefs at lineage and  settlement levels.  A lineage comprises extended families that trace their genealogy to the same ancestors. The extended families have heads who are often the oldest male. Ownership of property is passed on by patrilineal inheritances.

The Kpando district is traditionally controlled by twelve Traditional Areas.
These are namely: Akpini, Gbefi and Sovie.
Basically, the traditional authorities administer stool land holding them in trust for the people and arrange for the celebration of festival. They are also the custodian of traditional beliefs and customs. The traditional authority also have courts which adjudicate on matters relating to stool land, lineage and family land, chieftaincy title disputes, violation of traditions and disputes between localities, families and individuals

Language
The Ewe speaking communities inhabit the areas between the River Volta in modern Ghana and the River Mono on the border between todays Togo and Benin (former Kingdom of Dahomey). Ewe belongs to the Kwa group of Sudanic languages.
The population of Ewe speaking people is estimated anywhere between two and five million.

"Atsiã" was created by the Ewe-speaking people of Ghana. It is considered by many to be one of the oldest styles of music and dance among the Ewes. "Atsiã" is a social dance. In the Ewe language atsiã means "style" or "to display." "Atsiã" as a piece is comprised of drumming, dance and songs collectively.
Learn more about the instruments on Dance Drummer.
﻿﻿﻿ ﻿﻿﻿